Norwegian has expanded its Eastern European network with the addition of a new non-stop service between Palanga and Bergen, Norway. The first flight has now taken off from Palanga International Airport.

Passengers in Palanga can now explore the Norwegian city of Bergen this winter with fares from €29.99 one way. The route operates twice a week all year round, on Wednesdays and Saturdays.

“Norwegian’s new flight to Bergen from Palanga will allow passengers in the Palanga area to take advantage of our affordable fares while enjoying our award-winning, service complimentary WiFi and one of the newest, most environmentally friendly fleets in the world,” said Magnus Thome Maursund, SVP commercial Short Haul at Norwegian.

“Scandinavia and Norway in particular, is one of the most important destinations for passengers traveling from Lithuanian airports. There is a steady growth in demand between Lithuania and Scandinavia and for Norwegians to experience the Lithuanian coastline and its' heritage. We are pleased be able to offer Bergen as a new destination from Palanga Airport,” says Aurimas Stikliunas, Head of the Aviation Services Division of Lithuanian Airports.

As the Gateway to the Fjords of Norway, a UNESCO World Heritage City and a European City of Culture, the Bergen region combines nature, culture and urban life all in one place. Visitors can enjoy a trip to the fjords and the spectacular landscape views, before enjoying the history and culture of Bergen.

To book your flight, visit www.norwegian.com. 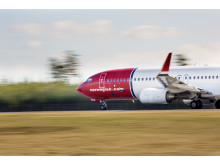