Norwegian’s traffic figures for November shows an increased unit revenue for the eighth consecutive month and was up 18 percent compared to the same month previous year. At the same time, the capacity was reduced, which is in line with the company’s strategy. The load factor was 83 percent, up by 4.2 percentage points.

A total of 2,283,821 passengers chose to fly with Norwegian in November. The company operated 99.8 percent of the scheduled flights this month, 86.2 percent of which departed on time, up 3.7 percentage points.

“We are pleased that our unit revenue continued to increase in November. Our load factor is higher and the on-time performance has improved. In line with our strategy of moving from growth to profitability, the planned capacity reduction has improved the figures. We have adjusted our route portfolio and capacity for the coming winter season and summer season to ensure that we are well positioned to meet the actual demand. The figures show that we continue to deliver on our strategy of moving from growth to profitability,” said Acting CEO and CFO of Norwegian, Geir Karlsen.

The total traffic (RPK) was down 23 percent and the capacity growth (ASK) was down 27 percent, in line with the strategy.

The company continued to reduce its CO2 emissions in November with 73 grams per passenger kilometre, a reduction of 6 percent compared to the same period last year. This is despite the grounding of the MAX aircraft which has forced the company to wetlease older aircraft. With an average age of 3.8 years, Norwegian has one of the world’s most environmentally friendly fleets. Thanks to this, the company has reduced its per passenger emissions by 30 percent since 2008. 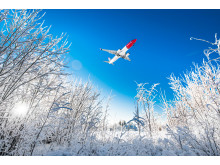 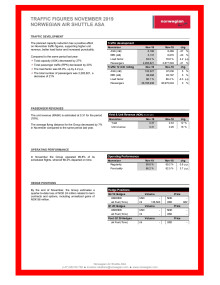