Norwegian has reached a new milestone for its fast-growing loyalty programme as Norwegian Reward has attracted 10 million members worldwide. Roughly 5000 members join the programme every day. Norwegian Reward’s expansion in the US, Spain and the UK has contributed to the rapid growth.

“Reaching 10 million members is a milestone. We are particularly pleased that we are growing so rapidly in the US, which is becoming an increasingly important market for us. Loyal customers are crucial to Norwegian Reward, and Norwegian. We will continue to expand and introduce new partners and make it even easier for our members to earn CashPoints,” said Managing Director of Norwegian Reward, Brede Huser.

The loyalty programme has been awarded nine prestigious accolades since its launch in 2007, including “Program of the Year Europe & Africa” at the Freddie Awards for three consecutive years.

Members earn CashPoints when booking Norwegian flights and through external partners, for instance when booking hotel rooms, car rental or airport lounges. Combined, Norwegian Reward’s members have now earned enough CashPoints to buy two million flights between London and New York, half of which have been earned through the loyalty programme’s many partners.

Members can then use their CashPoints as full or partial payment on all Norwegian flights, and on other Norwegian products such as checked baggage and pre-ordered meals. They can also earn an extra benefit or “Reward” after every sixth flight which can be used an unlimited amount of times within 12 months. These Rewards include free seat reservation, free baggage, free Fast Track and a CashPoint boost. Since the launch of Rewards in 2016, about one million members have obtained at least one Reward. 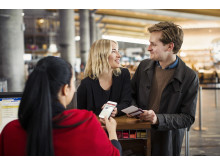