Norwegian carried more than 2.5 million passengers in February, an increase of 8 percent compared to the same month previous year. The growth is now slowing down considerably, in line with the strategy of returning to profitability.

A total of 2,517,335 passengers chose to fly with Norwegian in February. The total traffic growth (RPK) increased by 11 percent and the capacity growth (ASK) increased by 15 percent, down from 35 percent in February last year. The load factor was 81.5 percent.

“We are very pleased with the continued passenger growth in February, a month traditionally characterized by less demand. Norwegian has been through a period with significant growth, but now the company will change its strategic focus from expansion and growth to profitability. With a stronger financial position and lower cost going forward, we are well positioned to continue to attract new customers, not least in the long-haul market,” said CEO Bjørn Kjos.

Norwegian is a listed company on the Oslo Stock Exchange and is the world's fifth largest low-cost airline operating 500 routes to 150 destinations in Europe, North Africa, Middle East, Thailand, Caribbean, the U.S and South America. In 2018, Norwegian carried around 37 million passengers. Norwegian has almost 11,000 employees and a modern, more environmentally friendly fleet of more than 160 aircraft with an average age of 3.8 years. Norwegian has been voted ‘Europe’s best low-cost carrier’ by passengers for six consecutive years from 2013-2018, along with being awarded the ‘World's best low-cost long-haul airline’ for five consecutive years from 2015-2018 at SkyTrax World Airline Awards. 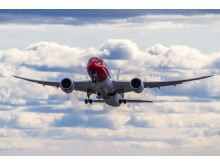 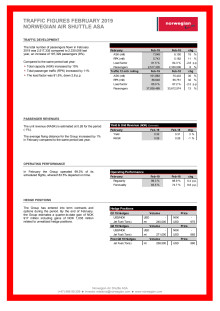