Norwegian’s traffic figures for February show that the company continues to deliver on its strategy of moving from growth to profitability, with significant improvements in unit revenue and a better punctuality. Due to the COVID-19 virus Norwegian currently experiences reduced demand on some routes and have decided to cancel 22 flights between Europe and the U.S.

Norwegian carried 1,955,585 customers in February. The planned capacity reduction and optimization of the route network continues to impact the figures positively. The punctuality for February was 84.2 percent and the load factor was 81.7 percent, up 0.2 percentage points.

“I am pleased that we continue to deliver on the strategy of returning to profitability following several years of significant growth. This is the eleventh consecutive month that the planned capacity reduction has impacted the unit revenue positively. I am also pleased that our on-time performance continues to improve as I know how important punctuality is for our customers. However, we are currently experiencing reduced demand on some routes due to the coronavirus and have therefore cancelled some flights between Europe and the U.S.,” said CEO of Norwegian, Jacob Schram.

The company’s CO2 emissions this month remain unchanged at 75 grams per passenger kilometre. The figures are influenced by the fact that the company has been forced to use wetlease aircraft. Norwegian has one of the world’s most environmentally friendly fleets. Thanks to the young fleet, the company has reduced its per passenger emissions by 33 percent since 2009. In February 2020, more than 37,000 customers who made a booking on Norwegian’s website chose to compensate the carbon footprint of their flight.

Change in demand due to COVID-19

Norwegian has during the past few days experienced reduced demand on some routes, particularly on future bookings. Bookings for flights departing in the coming weeks are less affected. The company has decided to cancel 22 long-haul flights between Europe and the U.S. from March 28 to May 5. Norwegian has a limited number of flights to Northern Italy and other regions heavily affected by the virus. In addition, the company has a higher share of leisure traffic, which seem less affected than business traffic. The company has also already reduced its capacity by up to 15 percent in 2020. Norwegian is monitoring the developments closely and is continuously evaluating additional changes to its schedule.

The following routes are affected: Rome – Los Angeles; Rome – Boston; Rome – New York (reduced number of departures during selected weeks on all these routes) and London – New York (three daily departures are reduced to two on some days).

Affected customers will be contacted by Norwegian and offered a new itinerary.

Given the uncertainty and ongoing impact on overall demand for air travel, Norwegian withdraws its 2020 guidance provided to the market on February 13, 2020. At this stage, it is too early to assess the full impact on our business.

Norwegian is a listed company on the Oslo Stock Exchange and is one of the largest low-cost airlines in the world, operating 500 routes to 150 destinations in Europe, North Africa, Middle East, Thailand, the U.S and South America. In 2019, Norwegian carried more than 36 million passengers. Norwegian has almost 11,000 employees and a modern, more environmentally friendly fleet of around 160 aircraft. Norwegian has been voted ‘Europe’s best low-cost carrier’ by passengers for six consecutive years from 2013-2018, along with being awarded the ‘World's best low-cost long-haul airline’ for five consecutive years from 2015-2019 at SkyTrax World Airline Awards. The company has twice been named the most fuel-efficient airline on transatlantic routes by the International Council on Clean Transportation (ICCT). 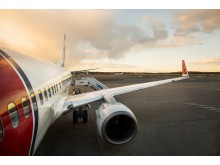