Norwegian carried more than 3.7 million passengers in July. The load factor was 93.5 percent, up half a percentage point.

A total of 3,714,432 passengers chose to fly with Norwegian in July. The total traffic (RPK) increased by six percent and the capacity growth (ASK) was five percent.

“Following a period of significant expansion and investments, the growth is slowing down, which is in line with our strategy of moving from growth to profitability. The figures also show that passengers travel longer distances and a higher load factor. This means that more people choose Norwegian when they are travelling, not least on intercontinental flights,” said Acting CEO and CFO of Norwegian, Geir Karlsen.

Norwegian’s long-haul operation had a capacity growth of 20 percent in July with a load factor of 94 percent. The number of American passengers continues to increase. In July, half of the passengers on board Norwegian’s intercontinental flights were Americans flying to Scandinavia, the UK, Spain, France, The Netherlands or Italy.

“This proves that Norwegian continues to boost local tourism, create jobs, drive economic growth and social progress in all markets we fly,” continued Karlsen. The company took delivery of one Boeing 787-9 Dreamliner in July.

The continued fleet renewal contributed to a further reduction of CO2 emissions in July from 68 to 67 grams per passenger kilometre compared to the same period last year. With an average age of 3.8 years, Norwegian has one of the world’s most environmentally friendly fleets. Thanks to its new fleet, the company has reduced its per passenger emissions by 30 percent since 2008.

Norwegian operated 99.2 percent of the scheduled flights in July, whereof 68.1 percent departed on time. The company’s on-time performance was impacted negatively due to general summer delays in European airspace, which was outside of Norwegian’s control. The use of wetlease aircraft in July also affected the on-time performance negatively. 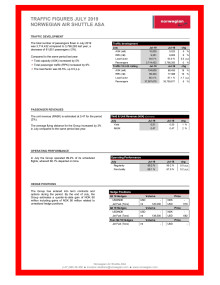