Norwegian today reported its full year and fourth quarter 2018 results, figures strongly affected by engine issues, fuel hedge losses and tough competition in a period of strong growth. The net loss was NOK 1,454 million in 2018, while the company’s unit costs, excluding fuel, have decreased by 12 percent during the same period.

The key priority going forward is returning to profitability through a series of measures, including an extensive cost reduction program, an optimized route portfolio and sale of aircraft. The company is also strengthening its balance sheet through a fully underwritten rights issue of NOK 3 billion in order to increase its financial position.

The company was hit by several unforeseen challenges during 2018. Continued tough competition and high jet fuel prices affected the results, in addition to significant costs related to Rolls Royce engine issues on the Dreamliners. Norwegian was forced to wetlease aircraft to avoid delays and cancellations on intercontinental flights. Norwegian has now reached an agreement with the engine manufacturer, which will have a positive effect in 2019. The Dreamliner operation is now running smoothly, and we don’t foresee that engine issues will affect our service going forward. Going into 2019, Norwegian’s growth and investments will decrease considerably, and a series of initiatives have been undertaken to return to profitability this year.

Fourth quarter results
For the fourth quarter, the total revenue was NOK 9.7 billion, an increase of 23 percent from the same period last year, primarily driven by international growth as well as increased traffic in the Nordics. More than nine million passengers flew with Norwegian this quarter, a growth of 12 percent. The load factor was 80.9 percent. The company incurred losses of NOK 1.8 billion on its current hedge positions in Q4. Some of the loss has since reversed due to the latest increase in the jet fuel price.The company’s unit costs, excluding fuel, decreased by 14 percent compared to the fourth quarter in 2017.

“We have taken a series of initiatives to improve profitability by reducing cost and increasing revenue going forward. We have optimized our base and route structure to streamline the operation as well as divested aircraft, postponed aircraft deliveries and not least started an internal cost reduction program, which will boost our financials and bring us back to profitability,” said CEO of Norwegian Bjørn Kjos.

“Going into 2019, we will enter a period of slower growth and fewer investments, while constantly looking for new and smarter ways to improve our efficiency and offer new products and services to attract new customers,” Kjos added. 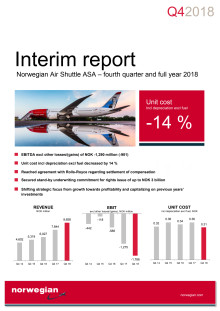