Norwegian continues its work for a more sustainable aviation industry by signing a three-year contract with AVTECH Sweden AB. The agreement is based on a successful test project, which resulted in a reduced fuel consumption of 22 kilos per flight. This equals an annual CO2 reduction of 16,000 tons - or a reduction of 5,000 tons of fuel per year, which in turn leads to reduced costs for Norwegian.

The agreement provides Norwegian’s pilots with highly accurate wind- and temperature information in accordance with their flight plan. Data is transferred to the aircraft’s systems, which makes it possible to optimize the flight path for improved fuel efficiency and reduced emissions.

“Our aim is to continue to reduce emissions with our fuel-effective aircraft combined with innovative technology. It is a pleasure to have signed this agreement with AVTECH, which is the result of a successful test project and yet another important step in our work towards reducing emissions in aviation,” says Tomas Hesthammer, Norwegian’s Director of Flight Operations.

The test project between Norwegian and AVTECH Sweden AB involved 29,000 flights and resulted in a reduced fuel consumption of 22 kilos per flight. The reduction equals an annual CO2 reduction of 16,000 tons, or an annual reduction of 5,000 tons of fuel on Norwegian’s flights. The test cooperation has been published by and co-financed by the Swedish Energy Authority.

“The cooperation with Norwegian shows all the advantages our technology can offer and we are glad to enter a commercial agreement with an airline that has such a modern and fuel-efficient fleet. With AVTECH’s unique weather service, the fuel consumption and emissions reduce further,” says Sören Skog, Marketing Director for AVTECH Sweden AB.

The new system will be implemented in all of Norwegian’s flights in the company’s global network.

Norwegian actively works to reduce emissions
Reduced fuel consumption is crucial to reducing emissions. In anticipation of biofuel becoming commercially available and manufactured in large scale, new aircraft is the single most important measure an airline can take to reduce emissions.

In September this year, Norwegian was named the world's most fuel-efficient airline on transatlantic routes by the The International Council on Clean Transportation (ICCT). The ICCT’s analysis shows that Norwegian has a fuel consumption of 44 passenger kilometers per liter, which is 33 percent more fuel-efficient than the industry average. 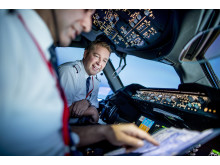