After 17 years as the CEO of Norwegian Air Shuttle, Bjørn Kjos (72) will leave the position and continue in a new role as an advisor to the Chairman, with effect from July 11th. Until Norwegian appoints a new CEO, CFO Geir Karlsen (54) will act as interim CEO, while Chairman Niels Smedegaard (57) will take on a more active role in the management.

“I am very pleased Bjørn will remain at the company as an advisor to the Board and the Chair. As Norwegian moves from growth to profitability, it will be an advantage for the company to benefit from Bjørn’s extensive network, in-depth knowledge of and experience with global aviation. We have already started the process of recruiting a permanent new CEO”, said Niels Smedegaard, Chairman of the Board of Directors at Norwegian.

“I am confident that the Board of Directors will find the best qualified successor to lead the next chapters of the Norwegian story together with the top management team. Leaving the exciting future tasks to a new CEO and taking on a new challenge as an advisor, is a set-up I am very happy with. I look forward to spending more time working on specific strategic projects that are crucial to the future success of Norwegian,” said Bjørn Kjos.

Bjørn Kjos is one of the founders of Norwegian Air Shuttle. During his tenure as CEO, the company has developed from a small domestic operation with 130 employees and four aircraft to a global and award-winning low-cost airline with more than 11,000 employees and 162 aircraft.

“Bjørn has played an unprecedented role in Norwegian’s success. His vision of offering affordable fares for all, combined with his enthusiasm and innovating spirit, has revolutionized the way people travel for pleasure and for business, not least between the continents. Bjørn is definitely one of the most influential European entrepreneurs of our time,” Smedegaard said.

Following a demanding period of financial and operational challenges, fueled by significant investments, Norwegian changed its strategy from growth to profitability in 2018. Going forward, the company will harvest from its rapid global growth and investments. Running a profitable business and boosting company value to the benefit of shareholders, customers and employees will be key for the CEO going forward.

“We have to ensure that Norwegian is well prepared and positioned to handle volatile markets and unexpected events. It is crucial that we continue to deliver on our cost reduction initiatives and that we constantly ensure that we have a route portfolio that yields profit. It is also important that the new CEO develops an organization that embraces continued improvement and operational excellence,” Smedegaard added.

Niels Smedegaard
Niels Smedegaard (born 1962) was the President and CEO of DFDS from 2007 to 2019. He has previously held leading positions in companies such as Gate Gourmet Group, Swissair and SAS. Smedegaard is a Danish citizen and holds a Master’s and Bachelor’s degree from Copenhagen Business School. He also holds a number of board appointments at various European companies. Niels Smedegaard has been elected Chairman of the Board of Norwegian for the period 2019 to 2021.

Bjørn Kjos
Bjørn Kjos (born 1946) has been the Chief Executive Officer (CEO) of Norwegian since October 2002. He is one of the founding partners of Norwegian Air Shuttle and was the Chairman of the Board from 1993 to 1996. Kjos was also Chairman during the start-up of the Boeing 737 operation from June to September 2002. Kjos was a fighter pilot in the 334 squadron for six years and is a law graduate from the University of Oslo. He was granted the right of audience in the Supreme Court in 1993.

Geir Karlsen
Geir Karlsen (born 1965) was appointed Chief Financial Officer (CFO) in April 2018 and deputy CEO in April 2019. He has extensive experience from listed companies within shipping and offshore. Geir Karlsen has over the last 12 years held various CFO positions with international companies such as Golden Ocean Group and Songa Offshore. Before joining Norwegian, he was Group CFO at London-based Navig8 Group, the world's largest independent pool and management company. Karlsen has a degree in Business Administration from BI Norwegian Business School.

The presentation and press conference can be live streamed here: https://video.qbrick.com/play2/embed/player?accountId=287078&mediaId=45c6c4c5-00090048-7a2b872d&configId=default&pageStyling=adaptive&autoplay=false&repeat=false&sharing=false 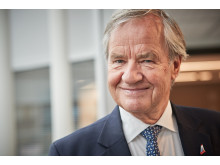